In a disturbing story that has hit the news, a child custody battle nearly turned on whether the child should stay with a mother suffering from terminal cancer. 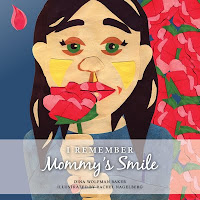 During two and one-half years of my childhood--when I was 9, 10 and 11--I experienced the illness and death of my mother from cancer. As someone who has been there, I find it sadly misguided that anyone might consider taking a child from a dying parent with whom she has a healthy, loving relationship.

I cherish the time I had with my mother, from her healthy years to the last few weeks when she was fading away in a hospital bed. My book for other children in this situation, I Remember Mommy's Smile (www.MommysSmile.com), chronicles not only the sadness of this time but also its beauty and hope. Had my mother and I been separated, I'd have been robbed of precious moments and the quality of my mother's last days would be have been diminished. Perhaps the professionals considering such cases should speak with those of us who have been there.
Posted by Baker's Dozen Press at 8:44 AM 0 comments

I actually was, considering the circumstances, quite lucky.  People have pointed out to me that in the early 70s people felt a young child could not understand death and talking about it would traumatize them.  But my family knew better. We were incredibly open with each other and I had constant access to adults who listened and who expressed their own feelings--my oldest brother, my aunt, my best friend's mother (who was a holocaust child, so certainly understood childhood trauma), when she was still with us my mother, and most of all my father, who has always been remarkably emotionally available and emotive for a man of his generation.

It was only as an adult, when I met others who'd lost their mothers at a young age, that I realized many fathers simply went silent, finding it hard enough to face their own feelings let alone help cope with their children's.  Yet even with the support I had, I still felt incredibly different--this just was not a circumstance I saw among the other children I knew (thankfully).  Feeling different is not something that children that age relish.  My friends were uncomfortable, but I understood--because my father had the insight and foresight to warn me--that this was because I represented their greatest fear, and in time they would stop seeing me as the kid whose mother died and go back to seeing me simply as their classmate or friend.

I also was fortunate to have my cousin and my best friend--still such a close friend that she is flying in from Salt Lake City for my 50th birthday celebration!--as they provided peer support and never stopped seeing me as just me.

Probably the bravest person is my husband. It's not easy to decide to spend your life with someone whose world view is shaped by the very tangible fear of losing those closest to her.

All in all, I was lucky.  And I still am.  I hope I can help others feel hopeful, as well.  That's why I've published I Remember Mommy's Smile, a book for children going through the illness and death of a parent--to help them and the adults in their lives establish the healing dialogue that goes such a long way.
Posted by Baker's Dozen Press at 5:47 PM 0 comments