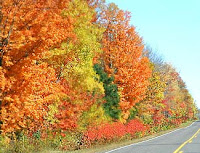 And Now I live in Before and After.  Appointments, full schedules, productivity.  Reflection, appreciation, sadness.  Speeding up and slowing down, sometimes it seems in the same moment.  Slow not equaling drawn out.  I don't know for how long this will last.  I expect that Now will become more and more like Before, but it's not on a time line.  And I can work with that, just as sometimes I can slow down, look at the scenery, and run twice as far.
Posted by Baker's Dozen Press at 4:12 PM