When I google the term “Bernard Wolfman,” it’s not until I get past the 40th page of results that many of them no longer refer to my father. 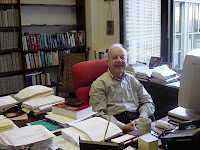 Thirty-some years ago, when I was in high school, I sat in on one of my father’s classes.  I took a seat in the back row of the lecture hall.  The students around me glanced over several times until one asked, “Who are you?”  The reply “Professor Wolfman’s daughter” was greeted with momentary silence and then the question, “He has a daughter?”

Indeed, many knew my father for the breadth and force of his intellect and influence as a legal scholar.  But he did have a daughter.  And four sons, ten grandchildren, a sister, niece, nephews, parents… and the privilege and joy of having been married to two women whom he deeply loved.   For all of these people, and the further extended family and his dear friends, his intellect made him all the more interesting and exciting to be around, but it did not define him. It is my father’s love, warmth and generosity for which we have always appreciated him and will remember him.

I should add that we’re not likely to forget his stubbornness either.  Then again, most of us share that trait so we’ll have constant reminders.

Even Dad’s stubbornness was in the service of his love for us.  Shortly after we moved to Cambridge, the window air conditioner in my bedroom broke and he arranged for a technician to come to the house to repair it.  While he was at work I hosted the service call.  I don’t recall the specifics, but the technician in some way cheated us.  My father was furious, not at me but at the technician for seizing on the opportunity to take advantage of my youthful naiveté and gullibility.  The combination of his protective, paternal instinct, and his stubborn inability to let anything go, ended with me – scared witless – speaking in small claims court after he had thoroughly prepped and rehearsed me.

My father was an extremely difficult person for whom to select gifts, a trait he generously handed down to the other men in our family.  So I’d put great energy into coming up with ideas, sometimes even holding brainstorming sessions with my co-workers.  For one major birthday Brad and I gave him a trip to adult space camp, as he always was enamored with space exploration.  True to form, he rose to captain of his team in the simulated space flight, and he loved the experience save for the terrible food (space camp seems to serve the adult groups exactly what they supply to the child campers) and the ruination of his team’s excellent record with his crash landing at the end.  On another occasion, we gave him a very fine, vintage bottle of red wine. He liked it as he would any bottle of red, never realizing it was anything different, but at least the sommelier standing by during the celebration feast was mightily impressed.

Despite these attempts to somewhat lavishly overcome the difficulty of finding the right gift for my father, it was the simple letter that I sent him to mark Father’s Day 1999 that was most effective.  My father was not raised in an era that promoted the emotional side of men.  However, Dad managed to defy that.  My letter thanked him for being so emotionally available to me because – especially during my mother’s illness and in the four years between her death and Dad’s marriage to Toni – that made all the difference in my life.  I recall one night while my mother was hospitalized; I came down from my room, unable to sleep and feeling terribly sad.  He took me into his lap, as he sat in a chair in the family room of our house in Elkins Park, and not only held me while I cried but cried with me.  In response to my Father’s Day letter, he drafted to me a heartfelt note in return, one I have kept.  I believe that it was for him the best gift I ever gave.  My father didn’t need great things from us, just love. 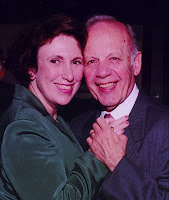 Marrying Toni was a one of my father’s choices that made a tremendous difference for me.  Toni, I want you to know how much I appreciate what you have brought into my life as a friend and as a mentor. You have been far more than the term step-mother can encompass, and your love for Dad has extended to love for and generosity to the rest of us, which we deeply feel and appreciate.

It is hardly surprising that Dad would have loved someone so giving. He generously gave of his deep well of affection, never short on hugs and kisses. He held my hand when we’d take walks together no matter how old we got (except during my adolescence, when I found this mortifying).  I learned from Dad not only love for family, but also for friends.  He offered unbounded loyalty and connection to lifelong friends whose meaning in his life he would readily articulate.

My father loved his family, loved his friends and loved the law.  He also loved baseball – though here he showed less loyalty as he rather capriciously switched allegiance from the Phillies to the Red Sox, after moving to Cambridge, much to the dismay of his children. He was really looking forward to a Phillies / Red Sox World Series this year.  And he loved natural beauty, taking us for bike rides and picnics on the Schuylkill River in Philly, later for walks in the extraordinary arboretum of Mt. Auburn Cemetery in Cambridge, and on outings to garden centers and nurseries.  Technology fascinated him and he became a computer user before I did, explaining to me DOS with complete awe and remarkable competency. He did this because he believed we should not simply do, we should understand.  To this end, my first driving lesson consisted not of driving but of learning how and why, behind the scenes of the automatic gears, they were shifting on my behalf.

Dad also had an extraordinary appreciation for and knowledge of language.  He was facile at foreign language, something I failed to inherit, but it was his interest in the English language over which we often bonded.  When I was in high school, after he’d acquired an edition of the OED that required a magnifying glass to read, he and I would pore over it together looking up words, and then the words from which they derived, and on and on.  Whenever I’ve been unsure of a grammatical choice, and could not arrive at a clear decision through my reference sources, I’d simply call my father.  He’d respond immediately and always accurately.  Then I’d receive a series of follow-up calls or emails with further explanation as he thought more about reasons for and nuances to the usage he’d recommended.

I will miss Dad’s calls and emails, his knowledge, his appreciation of nature, his joy for language, his enthusiasm for baseball (albeit for the wrong team), and even his stubbornness.  I will miss his love.

Posted by Baker's Dozen Press at 3:06 AM