I delivered this as the d'var Torah (sermon, or "words of Torah") at Temple Beth Israel in Waltham, MA on Saturday, August 22, 2015.  The Torah portion was Shoftim. 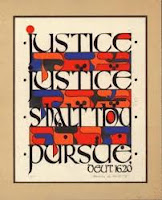 “Congress passed the Affordable Care Act to improve health insurance markets, not to destroy them. If at all possible, we must interpret the Act in a way that is consistent with the former, and avoids the latter.”

“Much progress remains to be made in our nation’s continuing struggle against racial isolation. The court acknowledges the Fair Housing Act’s continuing role in moving the nation toward a more integrated society.”


“No union is more profound than marriage, for it embodies the highest ideals of love, fidelity, devotion, sacrifice, and family. In forming a marital union, two people become something greater than once they were. As some of the petitioners in these cases demonstrate, marriage embodies a love that may endure even past death. It would misunderstand these men and women to say they disrespect the idea of marriage. Their plea is that they do respect it, respect it so deeply that they seek to find its fulfillment for themselves. Their hope is not to be condemned to live in loneliness, excluded from one of civilization’s oldest institutions. They ask for equal dignity in the eyes of the law. The Constitution grants them that right.


“This case concerns an endeavor by Arizona voters to address the problem of partisan gerrymandering — the drawing of legislative district lines to subordinate adherents of one political party and entrench a rival party in power…. The animating principle of our Constitution is that the people themselves are the originating source of all the powers of government.”


In the course of four days in June, the Supreme Court of the United States handed down in rapid succession these rulings for equity—in health access, in housing access, in marriage access, in political access.

Do you know the feeling, when seeing something of great beauty, that you are at once filled up by it, yet oddly hollowed as it leaves room for little else? That is the best I can describe how I felt for at least a week after these rulings—physiologically altered by the knowledge of them, filled by them.  The intensity has receded, but the sharp reminder of my awe at the power of justice remains acute.

Two weeks ago, my mother, Toni Wolfman, asked me about the theme of my upcoming d’var Torah.  I remarked that it would be the week of parasha Shoftim, with its extraordinary line, “Tzedek tzedek tirdof” – “Justice, justice, shall you pursue,” offering the opportunity to bring the recent Supreme Court decisions into my comments.  Toni told me that she had seen posters featuring that quote on the walls in Justice Ginsberg’ s chambers.  The two of them, along with—when they were alive—my father Bernard Wolfman and Justice Ginsberg’s husband Marty Ginsberg, have shared a friendship for many years.


On walls of my chambers, I have posted in two places the command from Deuteronomy—“Zedek, Zedek," "Justice, Justice shalt thou pursue." Those words are an ever present reminder of what judges must do "that they may thrive." There is an age old connection between social justice and Jewish tradition. Supreme Court Justice Arthur Goldberg… once said: "My concern for justice, for peace, for enlightenment . . . stems from my heritage."

In saying “that they may thrive,” Justice Ginsberg paraphrased the next few words of the biblical sentence, which in full states “Justice, justice shall you pursue that you may thrive and occupy the land that Adonai your God is giving you.”

At first reading, Shoftim might suggest rigidity in the legal system—twice stating that there may be no deviation “either to the right or to the left,” describing first how the people must adhere to the law and then how a king must do so. Yet the parasha firmly endorses the framework of an interpretive and evolutionary system of justice, one dependent upon human observation, intellect and judgement, and responsive to changing times.  Regarding “matters of dispute in your courts,” criminal or civil, the parties must present their cases to “the magistrate in charge at the time” and, upon a verdict, “act in accordance with the instruction given and the ruling handed down.”  This establishes the authority of judges to weigh matters and determine what is just in current society.

Similarly, this parasha makes room for governance by and for the people:  “…you shall be free to set a king over yourself…,” it states.  But there are parameters that God sets forth for any such king, constraints that seem intended to ensure a combination of objectivity and relevance. The king must be a kinsman, and thus govern from a native knowledge of, and perhaps loyalty to, his people.  The king cannot have such wealth that he risks condescension to those he leads, as the Torah states that “he shall not keep many horses…. And he shall not have many wives…nor shall he amass silver and gold to excess.”  And “he will not act haughtily toward his fellows.” So not only must one who governs be by and for the people; he must truly be of the people.

Recently, I heard a re-cast of a 2014 CBS interview with John Mellencamp.  A couple of years ago, at age 62, he learned that as a newborn he’d had ground-breaking, life-saving, 18-hour surgery for spina-bifida.  He was one of three infants receiving this new surgery in 1951 and the only one to live to adulthood.  One died during the operation, the other at age 14.  So Mellencamp got together with the surgeon who had saved his life, 97-year-old Dr. Robert Heimburger.  This is how Mellencamp recalled that meeting in his interview: "Basically we talked about faith, 'cause I have very little faith in anything." Mellencamp said that the doctor "just kept grabbing my hand and saying 'John, you need to have faith.'" And so now he says he’s "trying to find faith in something."

I’ve also always found faith—belief in something amorphous--to be one heck of a challenge.  And while sometimes I can grab onto the feeling of God, the fact or lack of faith in such a being can seem irrelevant, having little to do with how I act in this world. But as I heard Mellencamp recall his conversation with Dr. Heimburger it coalesced for me with my study of Shoftim and my reaction to this summer’s Court decisions.  I realized that the promise of justice gives me faith in humanity.  I understand that not every Court ruling will sit well with me; and some—to my mind—simply defy any understanding I have of justice.  Yet the promise is always there.  I’m acutely aware that in this same summer we have witnessed people gunned down, stabbed, and burned, and churches destroyed—in some cases in the name of patriotism and God—tempting us to fall into despondency. Yet our human-built and human-administered system of justice—which, transcending mere promise, has shown that it can burst forth with rulings that in four days fundamentally shift our society to one demanding greater equity and greater access—instead moves me to have faith in humanity. That may sound trite or simplistic, but I’m speaking of the power and desire that can live in and emerge from us—mere people—to shift the world in better directions.

Our text itself endorses and even mandates destruction and dispossession in the name of God and nationalism.  Yet it holds forth the promise of a system of justice and governance with the flexibility to mature over time and thus profoundly change civilization.  And it places faith in judges and leaders—people—to make that happen.  I share that faith in humanity.

But that’s not enough.  Perhaps this is what forms that basis of my difficulties with faith—ambivalence and even skepticism regarding faith.  It’s too easy to stop there, because we believe that something, someone, some power will take care of things.  Even the power and promise of justice, and even the fact of justice done well, does not take care of things.  We do.

While the knowledge of our Supreme Court’s rulings on equality may have filled me, their impact hits a ceiling, and my faith in humanity means little, unless they catalyze us to act.  The rulings give us a framework and an opportunity.  Let’s seize it.

A dozen years ago, when my son had some extra time, I decided it was a great opportunity to expose him to a variety of volunteer activities.  He responded with frustration at the meager impact of a few hours here and there in disjointed activities for small outreach organizations.  He said that he wanted to be involved—whether through activity or donations—only in large systemic change, so each contribution would by virtue of expanded infrastructure and efficient leverage of resource achieve greater influence.  While I still find value in individual contribution, in building upon small and even singular activities, and in exposing children to participation through exposure through manageable activities—I’ll concede that it wasn’t for Isaac.  What did appeal to him was joining a group of youth who formed a grant allocation board within Jewish Family & Children’s Services in Philadelphia.  Each researched, visited, reported on and issued recommendations for organizations to fund, and the group then voted for one to receive a significant grant—to which the children themselves in part contributed.  And, the fact is, Isaac was correct—when we function collectively, when we build infrastructure, when we achieve scale, we can extend the impact of each individual actor and each dollar.

I share this to illustrate why I said, a moment ago, that the rulings offer a framework and stimulus for us to act. Not me.  Not you.  Not him. Not her.  Us.  So I want to know how we as a community will respond at this catalyzing moment for impacting issues of equality.  Not how one of us addresses access to food for poor people, or how another of us addresses access to education and employment for people with mental illness.  These are important efforts that should continue.
But as a community and as an organization, how will we organize to singularly and amply commit our collective time, funds and infrastructure to  turning the promise of one of the rulings--for equity in health access, in housing access, in marriage access, or in political access—into  substantive effect?

Two days ago we marked, on the Gregorian calendar, the fourth anniversary of my father’s death.  He was a person for whom the pursuit of justice, and the practical societal implementation of its promise, informed just about everything. Even my name reflects that.  I’ve spoken today to honor my father, to celebrate the impact of a system built on justice, and to urge us to do justice by going beyond faith—to organize as a faith community, and as an institution—in a structured, ongoing, strategic, all-hands-on-deck manner to influence equity at scale.
Posted by Baker's Dozen Press at 10:05 PM